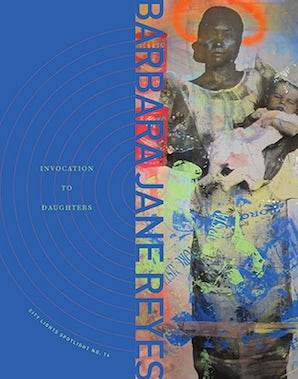 "Reyes writes with conviction about the various ways imperialism transforms women into 'capital, collateral, damaged soul.' However, the women that appear throughout the book are not merely victims; in Reyes's radical cosmology, these women—these daughters—are rebels, saints, revolutionaries, and torchbearers, 'sharp-tongued, willful.' This book is a call to arms against oppressive languages, systems, and traditions."—Publishers Weekly, starred review

"Infused with Spanish and Tagalog, Reyes's beautiful, angry verse shines throughout. For a wide range of readers."—Library Journal, starred review

Invocation to Daughters is a book of prayers, psalms, and odes for Filipina girls and women trying to survive and make sense of their own situations. Writing in an English inflected with Tagalog and Spanish, in meditations on the relationship between fathers and daughters and impassioned pleas on behalf of victims of brutality, Barbara Jane Reyes unleashes the colonized tongue in a lyrical feminist broadside written from a place of shared humanity.

Praise for Invocation to Daughters:

"Against violence against women, Barbara Jane Reyes rips and runs, jumping off Audre Lorde's 'the master's tools will never dismantle the master's house,' Invocation to Daughters recombines registers—prayers, pleas and elegy—braiding a trilingual triple-threat, a 3-pronged poetics that enjambs and reconfigures the formal with the street, utterance with erasure, the prose sentence with the liminal. Invocation to Daughters reminds me of the 70's in the East Bay, when Jessica Hagedorn met Ntozake Shange and ignited a green flash seen from horizon to horizon. Barbara Jane Reyes is one of the Bay Area's incendiary voices."—Sesshu Foster

"Invocation to Daughters is a space for multitudes, a hypnotic collection that draws from family history—particularly the complex cultural gendered dynamic between father and daughter—in order to create a manual for emancipation from the interior and exterior binds that keep us from ourselves. Through prayers, calls to actions, and testimonies, Reyes invents 'a language so that we know ourselves, so that we may sing, and tell, and pray.'"—Carmen Giménez Smith

Feminist experimental poetry in the tradition of Audre Lorde and Theresa Hak Kyung Cha from a prominent Filipina American poet.

Barbara Jane Reyes is the author of Invocation to Daughters (City Lights Spotlight Series, 2017). She was born in Manila, Philippines, raised in the San Francisco Bay Area, and is the author of four previous collections of poetry, To Love as Aswang (Philippine American Writers and Artists, Inc., 2015), Gravities of Center (Arkipelago Books, 2003), Poeta en San Francisco (Tinfish Press, 2005), which received the James Laughlin Award of the Academy of American Poets, and Diwata (BOA Editions, Ltd., 2010), which received the Global Filipino Literary Award for Poetry.

An Andrew W. Mellon Foundation Fellow, she received her B.A. in Ethnic Studies at U.C. Berkeley and her M.F.A. at San Francisco State University. She is an adjunct professor at University of San Francisco’s Yuchengco Philippine Studies Program. She has also taught in the Asian American Studies Department at San Francisco State University, and in Creative Writing and English at Mills College. She currently serves on the Board of Directors for Philippine American Writers and Artists (PAWA). She lives with her husband, poet Oscar Bermeo, in Oakland, where she is co-editor of Doveglion Press.