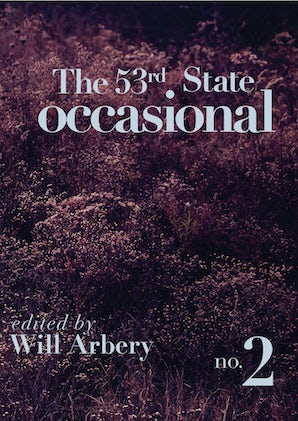 The 53rd State Occasional No. 2

The second installment of the Occasional, which invites a guest editor to talk with artists and thinkers.

Will Arbery is a playwright, performer, and filmmaker from Texas + Wyoming.

His play PLANO will premiere at Clubbed Thumb's Summerworks this June. His play Evanston Salt Costs Climbing will premiere at New Neighborhood/White Heron this August. He's currently under commission at Playwrights Horizons. His play Wheelchair is being published by 3 Hole Press this June, with an introduction by Bill Callahan.

He's a member of The Working Farm at SPACE on Ryder Farm, EST/Youngblood, a member of Calliope, and the recipient of a 2016-2017 Claire Rosen & Samuel Edes Foundation Prize for Emerging Artists.

He's been featured in Purple Mag, Howl Round, I Interview Playwrights, and TDF Stages. His writing has been published by Better Magazine, Word Riot, decomP, The Awl, Howl Round, Timber, Neutrons Protons, Snow Monkey, and more. He was named one of Variety’s “110 Students to Watch.”

MFA in Writing for the Screen + Stage from Northwestern University. BA in English & Drama from Kenyon College.

He grew up in Dallas, TX, the only boy with seven sisters.