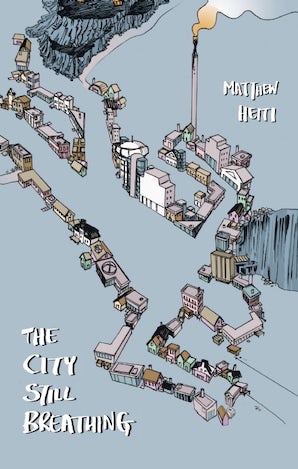 "This is a book with brains and muscle, resonant and intense, and Matthew Heiti is a prodigious talent, the spooky bard of mullets and muffin-tops, grow-ops and stolen snakeskin boots on Highway 69."  Mark Anthony Jarman

A body is found on the side of a highway. Naked, throat slashed, no identification. It disappears from the back of a police van and begins a strange odyssey, making its way, over the course of one early winter night, all around the northern town of Sudbury and through the lives and dreams of eleven very different people.

These eleven people  from the police officers who retrieve the body to the teenager who carries it away to the young woman planning to strike out for Toronto and Sudbury's local drug dealer  are all damaged in some way, and eventually, through the body itself, are brought together in a strange moment of violence.

A northern gothic noir, The City Still Breathing is an acid-washed love letter to the 1980s.

Born in a meteor crater, Matthew Heiti holds a BFA in Acting from Ryerson University and an MA in Creative Writing from the University of New Brunswick. His plays have been workshopped and produced at theatres and festivals across Canada. Matthew runs the Playwrights’ Junction at the Sudbury Theatre Centre, a workshop for developing writers; and he serves as playwright-in-residence with Pat the Dog Theatre Creation where he coordinates PlaySmelter, the region’s festival of new play development. He is a Genie-nominated screenwriter and his first novel, The City Still Breathing, is published by Coach House Books. Matthew was named one of CBC’s Writers to Watch in 2014. He lives in Sudbury.