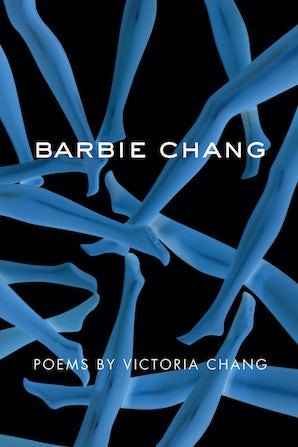 "With astringent understatement and wry economy, with nuance and intelligence and an enviable command of syntax and poetic line, Victoria Chang dissects the venerable practices of cultural piety and self-regard. She is a master of the thumbnail narrative. She can wield a dark eroticism. She is determined to tackle subject matter that is not readily subdued to the proportions of lyric. Her talent is conspicuous."—Linda Gregerson
"Chang's voice is equal parts searing, vulnerable, and terrified."—American Poets

This energetic string of linked poems is full of wordplay, humor, and biting social commentary involving the quote-unquote speaker, Barbie Chang, a disillusioned Asian-American suburbanite. By turns woeful and passionate, playful and incisive, these poems reveal a voice insisting that "even silence is not silent."
From "Barbie Chang Lives":
Barbie Chang lives on Facebook has
a house on Facebook
street so she can erase herself Facebook
is a country with
no trees it allows her to believe people
love her don't
want to cover her Barbie Chang . . .

Victoria Chang is the author of three previous poetry books. In 2013, she won the PEN Center USA Literary Award and a California Book Award. Chang teaches poetry at Chapman University and lives in Southern California.

Born in Detroit, Michigan to Taiwanese immigrants, Victoria Chang was educated at the University of Michigan, Harvard University, and Stanford Business School and holds an MFA in poetry from the Warren Wilson MFA Program for Writers. She is the author of five books of poetry, including Circle; Salvinia Molesta; and The Boss, which received a PEN Center USA Literary Award as well as a California Book Award. Her children’s picture book, Is Mommy? was named a New York Times Notable Book. She lives in Southern California with her family and serves as the Program Chair of Antioch’s Low-Residency MFA Program.