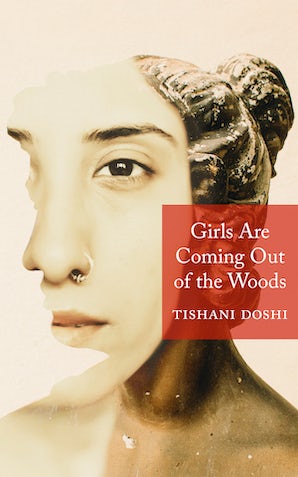 Girls Are Coming out of the Woods

“Tishani Doshi . . . offer[s] an eloquent dissection of the body—its attributes, metaphors, deficiencies and contradictions—all delivered in chromatic, richly textured lines, in which the assured manipulation of rhythm and internal rhyme produces poems of remarkable balance and grace.” —The Guardian

“Tishani Doshi combines artistic elegance with a visceral power to create a breathtaking panorama of danger, memory, beauty and the strange geographies of happiness.” —John Burnside

In her third collection of poetry, Tishani Doshi addresses violence against women by giving bodies abused and silenced bodies a chance to speak at last. Of and for the women that live on, she writes with bold reverence for that which thrives despite the odds—female desire, the aging body, the power of refusal. Doshi reminds us that poetry, at its root, is song—in praise and lament, hopeful and ebbing—calling out for truth and redemption.

. . . Up ahead, a row of fishermen. Legs like pins, tomb-sized chests, leaning back on their heels to haul. Say they are making noises at you. A sideways kind of sound designed to entice a small, brainless creature into a corner before smashing it underfoot . . .

Tishani Doshi was born in Madras, India. She is an award-winning poet, journalist, essayist, and novelist, whose work has been translated into five languages. Doshi is also a professional dancer with the Chandralekha Troupe. She lives in Tamil Nadu, India, with her husband and three dogs.

Doshi’s latest collection is like fire—these poems are as searing as they are a source of light.

Tishani Doshi is an award-winning poet and dancer of Welsh-Gujarati descent. She was born in Madras, India, in 1975. She received her masters in writing from the Johns Hopkins University in America and worked in London in advertising before returning to India in 2001 to work with the choreographer Chandralekha, with whom she performed on many international stages. An avid traveller, she has been trekking in the Ethiopian Bale Mountains, visited Antarctica with a group of high-school students, and documented the largest transvestite gathering in Koovakam. She has written about her travels in newspapers such as the Guardian, International Herald Tribune, The Hindu and the Financial Times. She won an Eric Gregory Award for her poetry in 2001. In 2006, she won the All-India Poetry Competition, and her debut collection, Countries of the Body (Aark Arts), won the Forward Prize for Best First Collection. Her first novel, The Pleasure Seekers (Bloomsbury, 2010), was longlisted for the Orange Prize and shortlisted for the Hindu Fiction Award, and has been translated into several languages. Her second poetry collection, Everything Begins Elsewhere, was published by Bloodaxe Books in 2012. Fountainville: new stories from the Mabinogion was published by Seren in 2013. Her third collection, Girls Are Coming Out of the Woods (Bloodaxe Books, 2018), is a Poetry Book Society Recommendation and was shortlisted for the Ted Hughes Award for New Work in Poetry 2018. Her second novel, Small Days and Nights, was published by Bloomsbury in 2019. Tishani Doshi currently lives on a beach between two ﬁshing villages in Tamil Nadu with her husband and three dogs, and sometimes moonlights as a dancer.