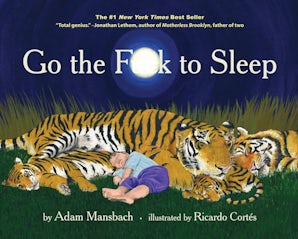 Go the Fuck to Sleep

A Reader's Digest "25 Funniest Books of All Time"

"Nothing has driven home a certain truth about my generation, which is approaching the apex of its childbearing years, quite like this."
--The New Yorker

"A hilarious take on that age-old problem: getting the beloved child to go to sleep."
--National Public Radio

"This children's book parody earns its place on the list by being a much-needed bit of catharsis that every parent needs."
--Fatherly, one of the 10 Best Parenting Books of the Decade

"Go the F**k to Sleep challenges stereotypes, opens up prototypes, and acknowledges that shared sense of failure that comes to all parents who weary of ever getting their darling(s) to sleep and briefly resuming the illusion of a life of their own."
--Midwest Book Review

Go the F**k to Sleep is a bedtime book for parents who live in the real world, where a few snoozing kitties and cutesy rhymes don't always send a toddler sailing blissfully off to dreamland. Profane, affectionate, and radically honest, California Book Award-winning author Adam Mansbach's verses perfectly capture the familiar--and unspoken--tribulations of putting your little angel down for the night. In the process, they open up a conversation about parenting, granting us permission to admit our frustrations, and laugh at their absurdity.

With illustrations by Ricardo Cortes, Go the F**k to Sleep is beautiful, subversive, and pants-wettingly funny--a book for parents new, old, and expectant. You probably should not read it to your children.

Seriously, Just Go to Sleep, a children's book inspired by Go the F**k to Sleep and appropriate for kids of all ages, is also available, as well as Seriously, You Have to Eat for finicky ones everywhere!

The #1 New York Times Best Seller--a gift book for parents that will have them laughing even as they cry.

Adam Mansbach is a novelist, screenwriter, humorist, and cultural critic (in addition to having built an obscene fake children's book empire). His books include Rage Is Back, the California Book Award–winning The End of the Jews, and the best sellers Angry Black White Boy and For This We Left Egypt?, cowritten with Dave Barry and Alan Zweibel. Mansbach was nominated for an Independent Spirit Award for his screenplay for the Netflix Original Barry, and is currently adapting his middle-grade novel Jake the Fake Keeps It Real for the Disney Channel. His work has appeared in the New Yorker, the New York Times Book Review, Esquire, and on National Public Radio's This American Life, the Moth, and All Things Considered.

Owen Brozman is the illustrator of the New York Times best seller You Have to Fucking Eat, Kindness & Salt, and the acclaimed graphic novel Nature of the Beast. He has illustrated for National Geographic, Entertainment Weekly, Time Out New York, Ninja Tune, Scholastic, and numerous other clients. His work has been recognized by 3x3 magazine, the Society of Illustrators of Los Angeles, Creative Quarterly, and many more. He lives and works in Brooklyn, New York.

RICARDO CORTÉS is the #1 New York Times best-selling illustrator of Go the F**k to Sleep by Adam Mansbach, and Party: A Mystery, by the acclaimed author Jamaica Kincaid. Cortés has written and illustrated books including Sea Creatures from the Sky and A Secret History of Coffee, Coca, and Cola. His work has been featured in the New York Times, Vanity Fair, New York Magazine, and on CNN, Fox News, and the Late Show with David Letterman. You can see his work at Rmcortes.com, or on Twitter and Instagram at @Rmcortes.