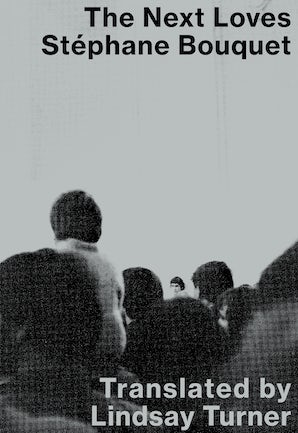 In Stéphane Bouquet’s The Next Loves, French poetic tradition meets the New York School poets in a unique take on homosexuality, desire, loneliness, and love in an era of global inequality and fundamental precarity. Bouquet’s work delicately carves out space for passages from I to you to the collective we.

Located at the intersection of the individual and the social capturing the complexities of desire in a global age.

Stéphane Bouquet is the author of several collections of poems and—most recently—a book of essays on poems, La Cité de paroles (2018). He has published books on filmmakers such as Sergei Eisenstein and Gus Van Sant, as well as screenplays for feature films, non-fiction films, and short films, and has translated poets including Paul Blackburn, James Schuyler, and Peter Gizzi into French. He’s also interested in performance arts and has given workshops for choreographers at the Centre National de la danse in Paris and for actors and stage directors at La Manufacture in Lausanne, Switzerland. Bouquet is a recipient of a 2003 Prix de Rome and a 2007 Mission Stendhal Award, and has been featured in France and internationally at festivals, residencies, and events, including the 2017 Frankfurt Book Fair and the 2018 Toronto Festival of Authors. He holds an M.A. in economics from Université Panthéon-Sorbonne.

Lindsay Turner is the author of Songs & Ballads (Prelude Books, 2018). Her translations from the French include adagio ma non troppo, by Ryoko Sekiguchi (Les Figues Press, 2018) and The Next Loves, by Stéphane Bouquet (forthcoming, Nightboat Books), as well as a book of philosophy by Frederic Neyrat, Atopias (co-translated with Walt Hunter, Fordham University Press, 2017). She is the recipient of a 2017 French Voices Grant for her translation of Stéphane Bouquet’s Vie Commune (currently seeking an American publisher). Originally from northeast Tennessee, she holds an A.B. from Harvard College, a Masters in cinema from the Université Paris III Sorbonne-Nouvelle, an M.F.A. in poetry from New York University, and a Ph.D. in English from the University of Virginia. In 2018-19, she is a Visiting Assistant Professor of English and Creative Writing at Furman University in Greenville, South Carolina.