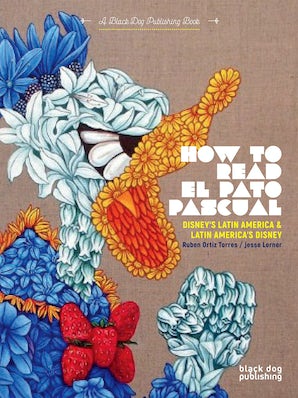 How to Read El Pato Pascual

With text in both English and Spanish

Drawing upon the reach of one of the world’s largest production companies, How to Read El Pato Pascual explores the prevalent presence of the Walt Disney Company within Latin America.

Examined through artworks spanning painting, photography, graphic work, drawing, sculpture, and video, as well as folk art, handcrafts and other vernacular objects, the book considers Disney’s engagement within Latin America, that extends from Donald Duck’s first featured role, the 1937 Mexican-themed short Don Donald, to the 2013 attempt to copyright The Day of the Dead.

The reach and influence of Disney is also viewed through a series of commissioned essays, with themes including “Disney, Marx and Labor” and “he Politics of Appropriations”. How to Read El Pato Pascual also features a reprint of How to Read Donald Duck, the essay by Ariel Dorfman and Armand Mattelart that critiques Disney comics from a Marxist point of view as being vehicles for American cultural imperialism.

Investigating the reception and reuse of the imagery of one of the world’s largest
production companies, this book explores the prevalent presence of Walt Disney
in Latin America. Examined through artworks including painting, photography,
graphic work, drawing, sculpture and video, as well as vernacular objects and
documentary material. In English and Spanish.

Rubén Ortiz-Torres (Mexico City, Mexico, 1964) was educated within the utopian models of republican Spanish anarchism and soon confronted the tragedies and cultural clashes of a postcolonial Third World. Despite being the son of a Latin American folk musician, he soon identified more with the noises of urban punk music. After giving up the dream of playing baseball in the major leagues and some architecture training (Harvard Graduate School of Design) he decided to study art. He went first to the oldest and one of the most academic art schools of the Americas (the Academy of San Carlos in Mexico City) and later to one of the newest and more experimental (CalArts in Valencia, CA). After enduring Mexico City’s earthquake and pollution he moved to Los Angeles with a Fulbright grant to survive riots, fires, floods, more earthquakes, and Proposition 187. During all this he has been able to produce artwork in the form of paintings, photographs, objects, installations, videos, films, customized machines, and even an opera. He is part of the permanent faculty of the University of California, San Diego. He has participated in several international exhibitions and film festivals. His work is in the collections of the Museum of Modern Art, New York; The Metropolitan Museum of Art, New York; the Museum of Contemporary Art Los Angeles: Los Angeles County Museum of Art; Artpace, San Antonio; the California Museum of Photography, Riverside; the Centro Cultural de Arte Contemporáneo, Mexico City; and the Museo Nacional Centro de Arte Reina Sofía, Madrid, Spain, among others. After showing his work and teaching art around the world, he now realizes that his dad’s music was in fact better than most rock ’n’ roll.