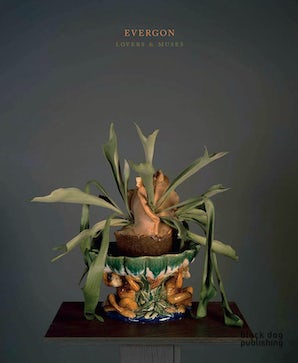 "Life inside the enchanted forest is a norm; it is only upon leaving the forest that you step into a memory of perversion. It

is memory that makes the work both document and fiction..."
From Evergon's early experiments with photographic and

the reproductive processes, such as 1 Boy with Ingrown Tattoo, 1971, to his celebrated large-scale Polaroid works

ongoing The Ramboys, 1991, to his most recent arresting preoccupation, Housebound, Evergon: Lovers & Muses provides a long-awaited panoramic overview of the artist's entire body of work. Extending from the artist's early engagement with projections of the self and the appropriation of popular culture and the history of art through his sustained representations of homosexuality and the championing of gay issues, Evergon's contribution to contemporary life and art is both particular and ubiquitous. While much of his work might be considered confrontational—indeed, this is, in part, the artist's intent— it is as much concerned with technique, that of both the photographer and the painter, and a studied and knowing appreciation and appropriation of the art of the past and present.
Comprising previously published essays, the artist's own poignant writing, and newly commissioned texts, Evergon: Lovers & Muses provides an acute, timely, and at times both amusing and sobering account of the work of one of Canada's most important contemporary artists.
Evergon's work is held in, amongst others, the following international collections: the National Gallery of Canada, Canadian Museum of Contemporary Photography, Art Institute of Chicago, the International Museum of Photography, New York, Musee de l'Elysee, Fondation Cartier our l'art contemporain.
"... I photograph the landscape not like a woman's body. There are no rolling hills, no valleys, no clouds, no expanse of water, no horizon, no illusions, no romance. I photograph the landscape like it is a man and I am loitering with intent." Evergon

"Life inside the enchanted forest is a norm; it is only upon leaving the forest that you step into a memory of perversion. It

is memory that makes the work both document and fiction..." From Evergon's...

He was born Albert Lunt in 1946 in Niagara Falls, Ontario, Canada. He studied at the Rochester Institute of Technology in the early 1970s. Throughout his career his work has used the medium of photography and photo-collage.
Major themes in his work include personal sexuality, gender construction, aging, and body image. His work frequently includes art historical references and questions accepted interpretation of certain canonical art. He was among the artists of the 1960s and 1970s who reacted against of the conventions of studio photography established through the post-World War II period. He has had over a thousand shows in Canada and internationally.
Evergon currently lives and works in Montreal and teaches at Concordia University.