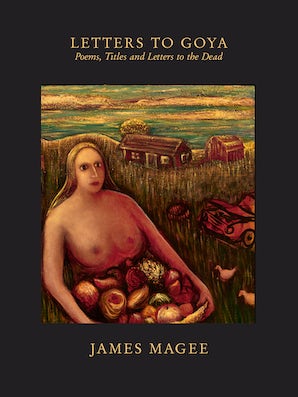 Why is Carl Jung dancing in the Streets of Death? Because one of his favorites among the living—artist James Magee, the creator of the colossal desert stonework, The Hill, and “the alleged” anima incarnate of the mysterious artist Annabel Livermore—has concocted this brew of poems and letters from the lands of Ordinary and Surreal. The poems flutter like butterflies from his imagination as he creates large steel assemblages. Weirdly, “Letters to Goya” are found pieces from 1955, from the rickety typewriter of the Duchess of Alba, who in (sur)real life is an old lady who wheel-chairs around the Waikiki Trailer Park in Sweetwater, Texas. Are the letters real? Well, yes. And no!

Tonight a cold rain falls in Tucson.
Under an overpass I see you standing stark-naked,
Juan,
headlights streaming by,
you toweling off with a wing of a blue and yellow bird
found moments ago near a storm sewer,
as if water were confessing of white tile,
a room without walls, really
where earlier you had imagined yourself as a bearded ancient,
a Mesopotamian Lord kneeling down in the wet grass near the freeway
to sing to an open field.

James Magee and his partner, actress Camilla Carr, live in El Paso, Texas, in the home of Annabel Livermore.

Kerry Doyle is the Director and Curator of the Rubin Center for the Visual Arts (University of Texas at El Paso), and a widely published scholar and respected curator of Latin-American and United States/Mexico Border arts.

In 1978, the incredibly prolific American artist (and now published poet) James Magee rooted himself in El Paso and Juarez on the U.S. Mexico Border. Michigan-born, Ivy League-educated to be a lawyer, gender-fluid, ex-taxi driver and off-shore roughneck, Magee made his home on the border because he had work to do, big work, big visionary work, and the frontera was a place to be alone to do that work, away from all the jingle-jangle of the NYC arts scene. Besides, he could cross the border and hang in the gay and transgender bars, he could live any life he wanted to live, and he could be the artist (or artists) he wanted to be. The place radiated renegade freedom. Besides, it was a cheap place to be an artist. Somehow, he bought 2,000 acres in the desert wilderness east of El Paso, and began creating The Hill, a massive stone work on the scale of Stonehenge, his on-going opus of the last four decades. He also created large metal collages, ornately framed, which he “titled” with remarkable poems. And then the artist Annabel Livermore (a retired Mid-Western librarian) sprang from Magee’s imagination like Athena sprang from the mind of Zeus. Annabel was not to be alone. Horace Mayfield, a gay artist, likewise sprang fully formed from the same imagination. Annabel lives in one house, Horace lives in another, and Magee migrates between the two. (Mayfield’s house, it should be noted, is outfitted for wheel-chair access because along the way Magee lost both legs to disease. It didn’t slow him down, thanks to prosthetics and incredible determination.) The sculptures and paintings of James Magee and Annabel Livermore (and more recently, Horace Mayfield) have been presented in major exhibitions across the United States and Latin America and have been widely covered by media in Europe. Magee’s The Hill is quickly becoming an art aficionado’s destination, except visits are rare and managed by The Cornudas Foundation. The Smithsonian recently purchased Magee’s archives. All the while, James Magee traveled the country, performing his "Titles" (aka, poems) in collaboration with contemporary classical musicians. This book of poems, Letters to Goya: Poems, Titles and Letters to the Dead, is Magee’s first general trade publication.