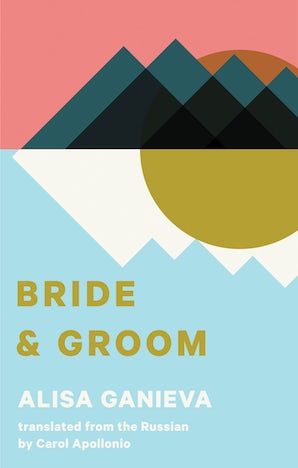 One of World Literature Today's Notable Translations of 2018

One of the Asian Book Review's Best Books of 2018

From one of the most exciting voices in modern Russian literature, Alisa Ganieva, comes Bride and Groom, the tumultuous love story of two young city-dwellers who meet when they return home to their families in rural Dagestan. When traditional family expectations and increasing religious and cultural tension threaten to shatter their bond, Marat and Patya struggle to overcome obstacles determined to keep them apart, while fate seems destined to keep them togetheruntil the very end.

A multilayered, magical story of love and fate as two modern city-dwellers grapple with traditional family expectations to find happiness.

Alisa Ganieva, born in 1985, grew up in Makhachkala, the capital of the southern Russian republic of Dagestan, wedged between the Caspian Sea, Chechnya, and Azerbaijan. Her literary debut, the novella Salaam, Dalgat!, published under a male pseudonym, provoked contradictory reactions in Russia: astonishment, especially among young Russians, at this unknown part of their country; and anger among radical Islamists at this negative portrayal of their homeland by one of their own. Salaam, Dalgat! won the prestigious Debut Prize in 2009, and Ganieva revealed her true identity only at the award ceremony. Ganieva's debut novel, The Mountain and the Wall, was shortlisted for all three of Russia's major literary awards, Deep Vellum published it in English in 2015, marking the first novel ever published in English by a Dagestani author. Bride and Groom was published in Russia in 2015 and was the runner-up for Russia's most prestigious literary award, the Russian Booker Prize. Ganieva's novels have been translated into a dozen languages. She lives in Moscow, where she works as a cultural journalist and literary critic.

Dr. Carol Apollonio is Professor of the Practice of Russian at Duke University. Her most recent literary translations include German Sadulaev's The Maya Pill (Dalkey Archive, 2014) and Alisa Ganieva's debut novel, The Mountain and the Wall (Deep Vellum, 2015). In addition to being an accomplished translator, Dr. Apollonio is also a scholar specializing in the works of Fyodor Dostoevsky and Chekhov and on problems of translation. She is the author of the monograph Dostoevsky's Secrets (2009), and she has edited volumes and numerous articles on nineteenth century Russian literature. She was awarded the Russian Ministry of Culture’s Chekhov Medal in 2010, and she currently serves as President of the North American Dostoevsky Society.