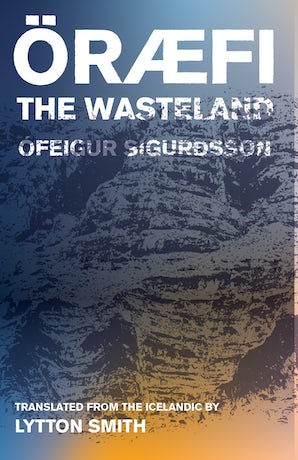 "Sigurdsson is without a doubt one of the best writers of his generation." Frettabladid Daily

After a grueling solo expedition on Vatnajökull Glacier, Austrian toponymist Bernhardt Fingerberg returns to civilization, barely alive, and into the care of Dr. Lassi. The doctor, suspicious of his story, attempts to discover his real motives for venturing into the treacherous wastelands of Icelandbut the secrets she unravels may be more dangerous than they're worth.

Ófeigur Sigurðsson (b. 1975) has published six books of poetry and two novels, including Jón (2010), the first Icelandic novel to receive the European Union Prize for Literature.

Ófeigur Sigurðsson was born in Reykjavík on November 2, 1975. He has published six books of poetry and two novels. Ófeigur has tried his hand at a number of things: working as a uniformed night-watchman at a hotel, pre-packing ham and bacon at a factory farm, exercising his brawn as a dock worker, and exercising his brains as a student at the Philosophy Department of the University of Iceland, from where he received his BA degree in 2007, with a thesis on the taboo and transgression in the works of Georges Bataille. Ófeigur is at the forefront of a poetic movement of dynamic young creative people, who have recently had a hand in reshaping the form of Icelandic poetry. He has translated literature and written for radio on writers including Louis-Ferdinand Céline and Michel Houellebecq. A prolific poet, Ófeigur has published several collections including Toast to the Midwinter (2001) and Redness (2006). In 2005 his first novel, Áferð, was published and received very positive reviews. His second novel, Jón (2010), the story of a man writing letters to his pregnant wife from a cave, became the first Icelandic novel to receive the European Union Prize for Literature. Ófeigur’s latest book, Öræfi, came out in 2014 and was the runaway literary sensation of the year, becoming a massive bestseller and receiving the Icelandic Literary Prize, and it was also chosen as the year's best book among the country's booksellers.

Lytton Smith (born 1982) is an Anglo-American poet and translator. His poetry collections include The All-Purpose Magical Tent (Nightboat Books, 2009), which was selected by Terrance Hayes for the Nightboat Books Poetry Prize in 2009, and a previous chapbook, Monster Theory, selected by Kevin Young for the Poetry Society of America Chapbook Fellowship in 2008. He has taught at Columbia University, Fordham University, and Plymouth University, and is currently a professor at SUNY-Geneseo. In addition to his work translation Jón Gnarr, he has translated two other novels from Icelandic: The Ambassador, by Bragi Ólafsson (Open Letter 2010) and A Child in Reindoor Woods by Kristín Ómarsdóttir (Open Letter, 2012), and his translation of Tómas Jónsson, Bestseller by Gudbergur Bergsson is forthcoming from Open Letter Books.

Lytton Smith is a poet, professor, and translator from the Icelandic. His most recent translations include works by Kristin Ómarsdóttir, Jón Gnarr, Ófeigur Sigurðsson, and Guðbergur Bergsson. His most recent poetry collection, The All-Purpose Magical Tent, was published by Nightboat. Having earned his MFA and PhD from Columbia University, he currently teaches at SUNY Geneseo.