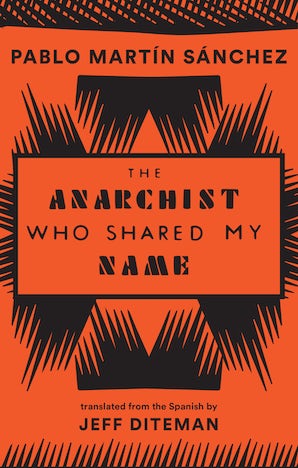 The Anarchist Who Shared My Name

When Pablo Martín Sánchez discovers that he shares his name with a Spanish anarchist who was executed in 1924 for the attempted overthrow of Primo de Rivera’s dictatorship, he sets out to reconstruct his life story. Through references to key events in Europe’s history, including the sinking of the Titanic and the Battle of Verdun, and the influence of intellectuals such as Miguel de Unamuno and Victor Blasco Ibañez, The Anarchist Who Shared My Name elegantly captures the life of a man who sought to resist political injustice and paid the ultimate price for his protest. Martín Sánchez’s thrilling tale is the unsettling chronicle of a dark chapter in Spanish history, as courageous as it is timely.

Bearing witness to key moments in Europe’s history, this thrilling novel explores the life of an anarchist in 1920s Spain.

Pablo Martín Sánchez was born in Reus, Spain in 1977. He graduated from the Institut del Teatre de Barcelona with a degree in Dramatic Art and from the University of Barcelona with a degree in Literary Theory and Comparative Literature. He received a Master’s degree in Humanities from the Carlos III University of Madrid and a Ph.D. in French Language and Literature from the University of Lille-3 as well as a a Ph.D. in Literary Theory and Art and Comparative Literature from the University of Granada. He is the author a collection of short stories, Fricciones (E.D.A. Libros, 2011), and two novels, The Anarchist Who Shared My Name (El anarquista que se llamaba como yo) and Tuyo es el mañana (Acantilado, 2016). In addition, he has translated the works of authors such as Alfred Jarry, Raymond Queneau, and Wajdi Mouawad, and teaches writing at the Ateneu School of Writing of Barcelona. In 2014 he was invited to join the Oulipo and is currently the only Spanish member of the group.

Jeff Diteman is a writer, artist, and translator from the French, Spanish, and Italian. He is currently studying for his Ph.D. Comparative Literature at the University of Massachusetts in Amherst. His writings and translations have been featured in Drunken Boat, The Missing Slate, Nailed Magazine, and Inventory.