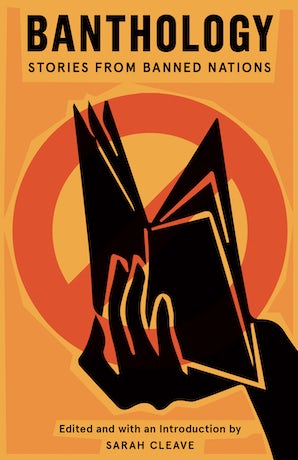 In January 2017, President Trump signed an executive order banning people from seven Muslim-majority countries – Iran, Iraq, Libya, Syria, Somalia, Sudan and Yemen – from entering the United States, effectively slamming the door on refugees seeking safety and tearing families apart. Mass protests followed, and although the order has since been blocked, amended and challenged by judges, it still stands as one of the most discriminatory laws to be passed in the US in modern times.

Banthology brings together specially commissioned stories from the original seven ‘banned nations’. Covering a range of approaches – from satire, to allegory, to literary realism – it explores the emotional and personal impact of all restrictions on movement, and offers a platform to voices the White House would rather remained silent.

Sarah joined Comma Press as Publishing Manager in January 2017. Prior to this she was Publishing Manager at Saqi Books and Telegram, where she oversaw the production, sale and distribution of literary fiction and non-fiction internationally. She was previously freelance Editor at Haus Publishing, and also worked in a communications role at the Migrants Resource Centre in London. She graduated from Glasgow University with a BA (Hons) in English Literature and French, and has a particular interest in women’s fiction in translation. She is the editor of Banthology (2017).Anoud is an Iraqi-born author living in Algiers.Wajdi al-Ahdal is a Yemeni novelist, short story writer, screenwriter and dramatist. He is the author of several collections of short stories and four novels, including A Land Without Jasmine (published in English by Garnet, 2012). His novel Mountain Boats was confiscated by the Yemeni Ministry of Culture for insulting ‘morality, religion, and conventions of Yemeni society’, and a campaign against the book drove him into exile for a number of years. He now lives in Saana.Ubah Cristina Ali Farah was born in Verona, Italy, of a Somali father and an Italian mother. She grew up in Mogadishu but fled at the outbreak of the civil war at the age of eighteen. She is a poet, novelist, playwright, and oral performer. She taught Somali language and culture at Roma Tre University and is currently based in Brussels. She has published stories and poems in several anthologies and in 2006 she won the Lingua Madre National Literary Prize. Her novel Madre piccola (2007) was awarded the prestigious Vittorini Prize and has been translated into Dutch and English.Najwa Binshatwan is a Libyan academic, novelist and playwright. She is the author of three collections of short stories and three novels, including The Slaves’ Pen (shortlisted for IPAF 2017). In 2005, her novel The Horses' Hair won the inaugural Sudanese al-Begrawiya Festival prize, in the same year that Sudan was Capital of Arab Culture. She was chosen as one of the 39 best Arab authors under the age of 40 by the Beirut39 project and her story ‘The Pool and the Piano’ was included in the Beirut39 anthology.Born in 1979, Rania Mamoun is a Sudanese author, journalist, and activist. She has published two novels in Arabic – Green Flash (2006) and Son of the Sun (2013) – as well as a short story collection Thirteen Months of Sunrise, which will be published in English by Comma Press in 2018. Her short stories have been published in various magazines and anthologies, including The Book of Khartoum (Comma Press, 2016), the first ever anthology of Sudanese short fiction in translation. She has also worked as culture page editor of Al-Thaqafi magazine, a columnist for Ad-Adwaa newspaper and presenter of the ‘Silicon Valley’ cultural programme on Sudanese TV.Born in Tehran, Fereshteh Molavi is the author of several works of fiction, short stories and essays including The House of Cloud and Wind, The Sun Fairy and The Departures of Seasons, which was admired by the Mehregan Literary Award (Tehran, 2012). While in Iran, unable to publish some of her works due to censorship, she compiled a comprehensive bibliography of short stories in Persian and also translated numerous works by internationally-known writers. She moved to North America in 1998, and was previously a research librarian and the Persian bibliographer at Sterling Library, Yale University. She now lives in Toronto and divides her time among writing, organizing literature events, and advocating freedom of speech and human rights in Iran.Zaher Omareen is a Syrian writer and researcher based in London. He has worked on independent cultural initiatives in Syria and Europe, and co-curated exhibitions on the art of the Syrian uprising. His short stories have appeared in Words Without Borders among others, and he recently co-edited and contributed to Syria Speaks: Art and Culture from the Frontline (Saqi Books, 2014). He is currently working on a collection of short stories drawn from the collective memories of the 1982 Hama massacre.