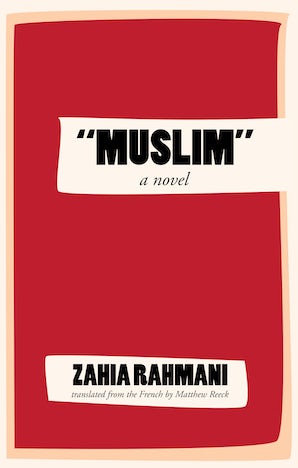 "Muslim" A Novel is a genre-bending, poetic reflection on what it means to be Muslim from one of France’s leading writers. In this novel, the second in a trilogy, Rahmani’s narrator contemplates the loss of her native language and her imprisonment and exile for being Muslim, woven together in an exploration of the political and personal relationship of language within the fraught history of Islam. Drawing inspiration from the oral histories of her native Berber language, the Koran, and French children’s tales, Rahmani combines fiction and lyric essay in to tell an important story, both powerful and visionary, of identity, persecution, and violence.

Fiction and lyric essay combine in Zahia Rahmani’s poetic reflection on Islamic history and what it means to be Muslim.

The Algerian-born academic and author Zahia Rahmani is one of France’s leading art historians and writers of fiction, memoirs, and cultural criticism. She is the author of a literary trilogy dedicated to contemporary figures of so-called banished people: Moze (Sabine Wespieser Editions, 2003); Muslim: A Novel (Sabine Wespieser Editions, 2005); France: Story of Childhood (Sabine Wespieser Editions, 2006). The US edition of France, Story of Childhood was published by Yale University Press in 2016. The French Ministry of Culture named her Chevalier of Arts and Letters and as a member of the College of the Diversity. As an art historian, Rahmani is Director of the Research Program on Art and Globalization at the French National Institute of the History of Art (INHA), an interdisciplinary program that focuses on contemporary art practices in a globalized world and it links many networks in France and abroad. She is the founder and director of INHA’s ambitious Interactive Bibliographic Database, on the globalization of art, its history and theoretical impact. Rahmani is a member of the Global Visual Cultures Academic Committee and she also created the graduate research program at the École Nationale des Beaux-Arts, which she directed from 1999-2002. Her multi-year international research project at the INHA in Paris and Marseille culminated in Made in Algeria: Genealogy of a Territory, a book and current exhibition of colonial cartography, high and popular visual culture, and contemporary art at the Museum of European and Mediterranean Civilisations (MuCEM), located in Marseille.

Matt Reeck is an award-winning poet and translator from the French, Urdu, Hindi, and Korean. He is the recipient of a Fulbright Fellowship to India, the American Institute of Indian Studies, and the PEN Foundation. He has translated from the Urdu novels by Saadat Hasan Manto, Bombay Stories (Vintage Classics UK & US, 2014) and Mushtaq Ahmed Yousufi, Mirages of the Mind (New Directions, 2015). His translations from the French include Abdelkébir Khatibi’s Class Warrior—Taoist Style (Wesleyan University Press, 2017) and Zahia Rahmani’s Muslim: A Novel (Deep Vellum, forthcoming 2019). He is currently completing his PhD in Comparative Literature at the University of California Los Angeles.