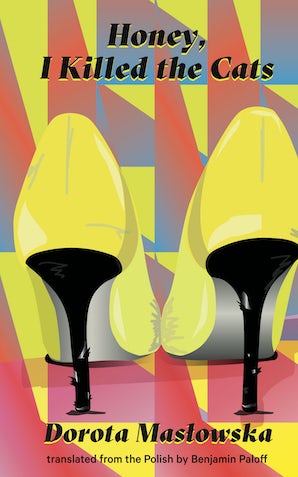 Honey, I Killed the Cats

From bestselling, internationally acclaimed author Dorota Masłowska comes a hilarious and devastating satire of consumer culture. Set in a bizarro, all-too-real imaginarium of American pop culture, Honey, I Killed the Cats introduces us to two independent young women struggling to live the lives that television and glossy magazines have promised them. In a collision of street slang and mass-media sloganeering, Masłowska's electrifying prose drives a propulsive story about spiritual longing in a dispirited world.

Masłowska’s novel examines the ways we attempt to exist and find meaning in lives defined by what we buy. In this warped world saturated by advertising and materialism, where everything can be bought, from personality and physical traits to religion and self-fulfillment, Joanne and Farah, two very different women form a friendship both bonded in and ultimately destroyed by the manipulations of consumer culture.

Joanne has everything the commercials say you should want—confidence, a carefree life, happiness to excess. Farah is a self-loathing, envious, germophobic malcontent. Through a shared metaphysical dream experience that spills over into their increasingly troubled day-to-day lives, these best friends find themselves consumed by their equal-and-opposite obsessions.

Widely regarded as Polish literary sensation Masłowska’s best novel yet, Honey, I Killed the Cats is a powerfully emotional, hilariously grotesque satire of Western consumer culture and the trends that go along with it.

An incomparably hilarious satire of modern consumer culture, with everything from personality to religion commodified, like Virginie Despentes meets Blade Runner.

Dorota Masłowska is a Polish writer, playwright, and journalist. She is the recipient of the prestigious Polityka Prize for her debut novel Wojna polsko-ruska pod flagą biało-czerwoną (Snow White and Russian Red, Grove Atlantic), published when she was just 19 years old. The book garnered massive critical acclaim in Poland, has been translated into dozens of languages, and was made into a movie directed by Xawery Żuławski. Since then, she has written several novels and plays and has become a celebrated literary figure in Poland. Honey, I Killed the Cats, her second novel to be published in English, has been adapted for stage and portions were made into a short film directed by Marcin Nowak. She currently resides Warsaw.

Benjamin Paloff received his Ph.D. in Slavic Languages and Literatures from Harvard University in 2007. He is the author of Lost in the Shadow of the Word (Space, Time and Freedom in Interwar Eastern Europe) (Northwestern University Press, 2016), which in 2015 received the American Comparative Literature Association's Helen Tartar First Book Subvention Prize. He has also published two collections of poems, And His Orchestra (2015) and The Politics (2011), both from Carnegie Mellon University Press. A former poetry editor at Boston Review, his poems have appeared in A Public Space, The Paris Review, The New Republic, and elsewhere, and he has translated several books from Polish and Czech, including works by Richard Weiner, Dorota Maslowska, Marek Bienczyk, and Andrzej Sosnowski. He has twice received grants from the National Endowment for the Arts—in poetry as well as translation—and has been a fellow of the US Fulbright Programs, the Stanford Humanities Center, and the Michigan Society of Fellows. He is currently a professor at the University of Michigan.