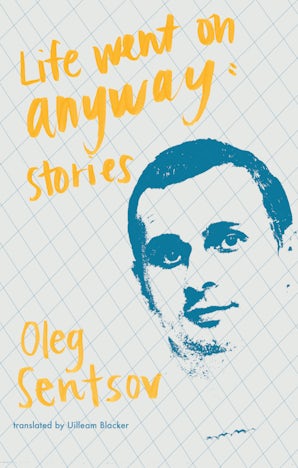 The stories in Ukrainian film director, writer, and dissident Oleg Sentsov’s debut collection are as much acts of dissent as they are acts of creative expression. These autobiographical stories display a mix of nostalgia and philosophical insight, written in a simple yet profound style looking back on a life's path that led Sentsov to become an internationally renowned dissident artist.

Sentsov's charges seemingly stem from his opposition to Russia's invasion and occupation of eastern Ukraine where he lived in the Crimea. He was sentenced to 20 years in prison in August 2015 on spurious terrorism charges after he was kidnapped in his house and put through a grossly unfair trial by a Russian military court, marred by allegations of torture. Many of the stories included here were read during international campaigns by PEN International, the European Film Academy, and Amnesty International, among others, to support the case for Sentsov across the world. Sentsov's final words at his trial, "Why bring up a new generation of slaves?" have become a rallying cry for his cause. He spent 145 days on hunger strike in 2018 to urge the Russian authorities to release all Ukrainians unfairly imprisoned in Russia, an act of profound courage that contributed to the European Parliament's awarding him the prestigious Sakharov Prize for Freedom of Thought

Sentsov remains in a prison camp in Russia. It is the publisher's hope this book, published in collaboration with PEN Ukraine, contributes to his timely release.

Timely, Tarkovskian collection of stories by Sakharov Peace Prize-winning Ukrainian film director whose political imprisonment in Russia since 2014 is an international cause célèbre

Oleg Sentsov is a Ukranian filmmaker and writer from Crimea, best known for his 2011 film Gamer. Sentsov was arrested in May 2014 in Crimea on suspicion of “plotting terrorist acts,” after participating in the EuroMayden demonstrations that led to the overthrow of former Ukrainian President Viktor Yanukovych and helping deliver supplies to trapped Ukrainian troops during Russia’s occupation of Crimea. He was sentenced to 20 years in prison, causing an outcry by international human rights groups who condemned his imprisonment as a fabrication by the Russian government in an attempt to silence dissent, and calling for investigations into reports of torture and witness coercion. In 2017 he was given the PEN/Barbey Freedom to Write Award. Sentsov’s work includes several scripts, plays, and essays, as well as two short films, A Perfect Day for Bananafish and The Horn of the Bull. In May of 2018, he went on a hunger strike to protest the incarceration of Ukrainian political prisoners in Russia.

Dr. Uilleam Blacker is an academic and translator specializing in Ukrainian, Polish and Russian literature. His translations of contemporary Ukrainian literature have appeared in numerous publications, including Modern Poetry in Translation, Words Without Borders and Dalkey Archive's Best European Fiction series.