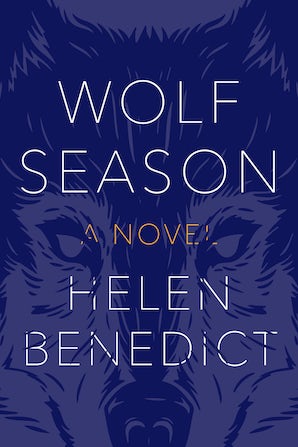 "[Helen Benedict] has emerged as one of our most thoughtful and provocative writers of war literature." —David Abrams, author of Fobbit and Brave Deeds, at the Quivering Pen

"No one writes with more authority or cool-eyed compassion about the experience of women in war both on and off the battlefield than Helen Benedict. . . . Wolf Season is more than a novel for our times; it should be required reading." —Elissa Schappell, author of Use Me and Blueprints for Building Better Girls

"Fierce and vivid and full of hope, this story of trauma and resilience, of love and family, of mutual aid and solidarity in the aftermath of a brutal war is nothing short of magic. . . . To read these pages is to be transported to a world beyond hype and propaganda to see the human cost of war up close. This is not a novel that allows you to walk away unchanged." —Cara Hoffman, author of Be Safe I Love You and Running

"A novel of love, loss, and survival, Wolf Season delves into the complexities and murk of the after-war with blazing clarity. You will come to treasure these characters for their strengths and foibles alike. Helen Benedict has delivered yet again, and contemporary war literature is much the better for it." —Matt Gallagher, author of Kaboom: Embracing the Suck in a Savage Little War and Youngblood

After a hurricane devastates a small town in upstate New York, the lives of three women and their young children are irrevocably changed. Rin, an Iraq War veteran, tries to protect her blind daughter and the three wolves under her care. Naema, a widowed doctor who fled Iraq with her wounded son, faces life-threatening injuries and confusion about her feelings for Louis, a veteran and widower harboring his own secrets and guilt. Beth, who is raising a troubled son, waits out her marine husband's deployment in Afghanistan, equally afraid of him coming home and of him never returning at all. As they struggle to maintain their humanity and find hope, their war-torn lives collide in a way that will affect their entire community.

Helen Benedict is the author of seven novels, including Sand Queen, a Publishers Weekly "Best Contemporary War Novel"; five works of nonfiction, including The Lonely Soldier: The Private War of Women Serving in Iraq; and the play The Lonely Soldier Monologues. She lives in New York.

The war comes home in a searingly compassionate story about the wounds inflicted on soldiers, refugees, and their families

Helen Benedict, a professor at Columbia University, is the author of seven novels, including Wolf Season, a Firecracker Award Finalist and National Reading Group Month “Great Group Reads” selection, and Sand Queen, a Publishers Weekly “Best Contemporary War Novel.” A recipient of both the Ida B. Wells Award for Bravery in Journalism and the James Aronson Award for Social Justice Journalism, Benedict is also the author of five works of nonfiction, including The Lonely Soldier: The Private War of Women Serving in Iraq, and the play The Lonely Soldier Monologues. She lives in New York.