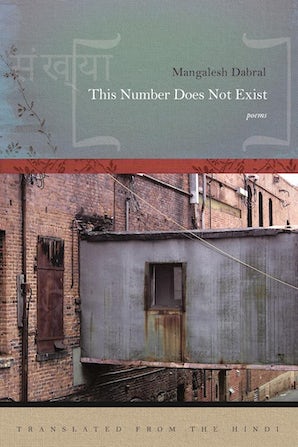 This Number Does Not Exist

An attentive critique on contemporary reality—modernity, capitalism, industrialization—this first United States publication of Mangalesh Dabral, presented in bilingual English and Hindi, speaks for the dislocated, disillusioned people of our time. Juxtaposing the rugged Himalayan backdrop of Dabral's youth with his later migration in search of earning a livelihood, this collection explores the tense relationship between country and city. Speaking in the language of deep irony, these compassionate poems also depict the reality of diaspora among ordinary people and the middle class, underlining the big disillusionment of post-Independence India.

"Song of the Dislocated"

mud slips behind us now
stones fall in a hail

look back a bit brother
how the doors shut themselves

behind each one of them
a room utterly forlorn

Mangalesh Dabral was born in 1948 in the Tehri Garhwal district of the Himalayas. The author of nine books of poetry, essays, and other genres, his work has been translated and published in all major Indian languages and in Russian, German, Dutch, Spanish, French, Polish, and Bulgarian. He has spent his adult life as a literary editor for various newspapers published in Delhi and other north Indian cities, and has been featured at numerous international events and festivals, including the International Poetry Festival. The recipient of many literary awards, he has also translated into Hindi the works of Pablo Neruda, Bertolt Brecht, Ernesto Cardenal, Yannis Ritsos, Tadeusz Rozewicz, and Zbigniew Herbert. Dabral lives in Ghaziabad, India.

Presented in bilingual English and Hindi, this first United States publication of Mangalesh Dabral is a compassionate critique on modern society.

Mangalesh Dabral was born in 1948 in a village of the Tehri Garhwal district (the Himalayan region). He has spent all of his adult life as a literary editor for various newspapers published in Delhi and other north Indian cities. His books include five collections of poems, Pahar Par Laltein (Lantern on the Mountain, 1981), Ghar Ka Rasta (The Way Home, 1981), Hum Jo Dekhate Hain (That Which We See, 1995), Aawaaz Bhi Ek Jagah Hai (Voice Too Is a Place, 2000) and Naye Yug Mein Shatru (New-Age Enemies, 2013), and two collections of literary essays and sociocultural commentary, Lekhak Ki Roti (Writer’s Bread, 1998) and Kavi Ka Akelapan (Solitude of a Poet, 2008), and a book of conversations, Upkathan (Substatement, 2014). He has also published a travel account, Ek Baar Iowa (Once in Iowa, 1996), based on his experiences in Iowa, USA, where he resided for three months as a fellow of the International Writing Program in 1991. His poems have been widely translated and published in all major Indian languages and in Russian, German, Dutch, Spanish, French, Polish and Bulgarian. They have been included in various periodicals, such as Modern Poetry in Translation, World Literature Today, The Poetry Review and The Little Magazine, and the anthologies Periplus (ed. Daniel Weissbort and Arvind Krishna Mehrotra), Survival (ed. Daniel Weissbort and Girdhar Rathi), Gestures (an anthology of poems from SAARC countries) and Signatures (ed. K. Satchidanandan). Aawaaz Bhi Ek Jagah Hai was translated into Italian by Prof. Mariola Offredi under the title Anche la Voce e un Luogo. Dabral been featured in many events and festivals, including the International Poetry Festival in Rotterdam, the Netherlands, and others in Bulgaria, Czechoslovakia, Russia, and various cities in Germany. He has translated into Hindi the poems of Pablo Neruda, Bertolt Brecht, Ernesto Cardenal, Yannis Ritsos, Tadeusz Rozewicz, Zbigniew Herbert, to name a few. He has also worked as a consultant to the National Book Trust, India, and has received a number of awards, including Shamsher Sammaan (1995), Pahal Sammaan (1998) and the Sahitya Akademi Award (2000). Dabral currently lives in Ghaziabad, India.