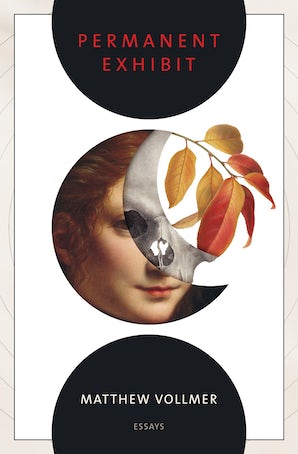 Matthew Volmer fuses the insight of extended meditation with the immediacy of social media in his new collection Permanent Exhibit. These collage-style essays experiment with stream-of-conscious musings as Vollmer opens a browser window into his own mind: letting his thoughts wander through a fast-forward montage of flying snakes, mass shootings, emojis, pop stars, stargazing, ghosts, circuses, and a hundred other things. Full of keen observations and unexpected insights, Permanent Exhibit reclaims the art of letting one’s mind wander in the age of the status update.

Brief collage-style essays that explore the ephemeral and fractured nature of life in the digital age.

Matthew Vollmer was born in Asheville, North Carolina and grew up in the mountains of western North Carolina. A graduate of the University of North Carolina, he attended the Iowa Writers’ Workshop at the University of Iowa. He is the author of two collections of short fiction—Gateway to Paradise (Persea, 2015) and Future Missionaries of America (MacAdam/Cage, 2009; Salt Publishing, 2010)—as well as a collection of essays: inscriptions for headstones (Outpost19, 2012). His work has appeared in Paris Review, Glimmer Train, Tin House, Virginia Quarterly Review, Epoch, Ecotone, New England Review, The Sun, Best American Essays, and The Pushcart Prize Anthology. With David Shields, he co-edited FAKES: An Anthology of Pseudo-Interviews, Faux-Lectures, Quasi-Letters, “Found” Texts, and Other Fraudulent Artifacts (W. W. Norton, 2012), and he served as editor for The Book of Uncommon Prayer, an anthology of everyday invocations featuring the work of over 60 writers. A winner of a 2010 NEA grant for literature, he teaches in the English Department at Virginia Tech, where he is an Associate Professor, and lives in Blacksburg with his wife and son.