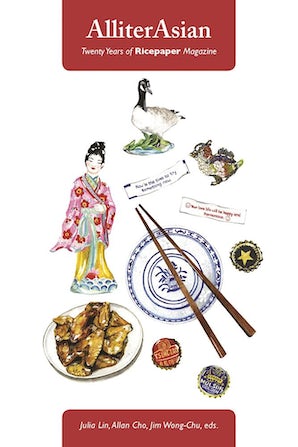 This anthology of Asian Canadian writing celebrates the twentieth anniversary of Ricepaper magazine, one of the few publications dedicated to literary writing by Asians outside of Asia. It includes new work by such writers as Joy Kogawa, author of the classic Canadian novel Obasan; Sky Lee, author of Disappearing Moon Café; and Fred Wah, the former poet laureate of Canada. There's also contemporary, cutting-edge fiction from writers such as Doretta Lau, Yasuko Thanh, and Kim Fu, author of For Today I Am a Boy.

AlliterAsian is an intriguing collection that reveals the beguiling new literary traditions of the Asian diaspora.

A wide-ranging literary anthology on the Asian diaspora, in conjunction with the celebrated Canadian magazine Ricepaper.

Allan Cho: Allan Cho works as an academic librarian at the University of British Columbia. His writing has appeared in Ricepaper, The Georgia Straight, and Diverse.
Julia Lin: Julia Lin is the author of Miah, the first book-length work of Taiwanese-Canadian literary fiction ever published.
Jim Wong-Chu: Jim Wong-Chu is a writer, historian, and editor. He is a founding member of the Asian Canadian Writers' Workshop, the publisher of Ricepaper magazine.

Jim Wong-Chu (1949-2017) was a poet, author, editor, and historian, and the founder of the Asian Canadian Writers’ Workshop and Ricepaper magazine. He co-edited numerous anthologies including AlliterAsian: Twenty Years of Ricepaper Magazine and Swallowing Clouds: An Anthology of Chinese-Canadian Poetry.