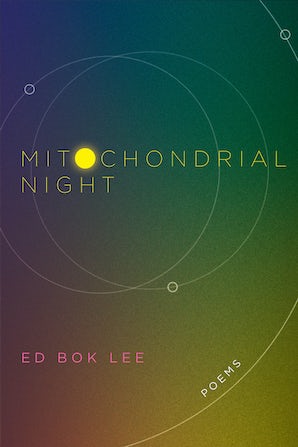 Taking mitochondrial DNA as his guide, Lee explores familial and national legacies, and their persistence across shifting boundaries and the erosions of time. In these poems, the trait of an ancestor appears in the face of a newborn, and in her cry generations of women's voices echo. Stories, both benign and traumatic, travel as lore and DNA. Using lush, exact imagery, whether about the corner bar or a hilltop in Korea, Lee is a careful observer, tracking and documenting the way that seemingly small moments can lead to larger insights.

We’re drumming,
he explained, in the tradition
of shamans,
so the ancestors won't be so lonely.
Because spirits need us
more than we need them.
And for hours
they’ll listen to anyone

Poems that trace paths through time, genealogy, and geography, locating the generational legacy of history.

Ed Bok Lee is the author of Whorled (Coffee House Press) and a recipient of a 2012 American Book Award and the Minnesota Book Award in Poetry. Lee is the son of North and South Korean emigrants—his mother originally a refugee from what is now North Korea; his father was raised during the Japanese colonial period and Korean War in what is now South Korea. Lee grew up in South Korea, North Dakota, and Minnesota, and was educated there and on both U.S. coasts, Russia, South Korea, and Kazakhstan. He teaches at Metropolitan State University in Saint Paul, Minnesota. Other honors include the Asian American Literary Award (Members’ Choice Award) and a PEN Open Book Award.