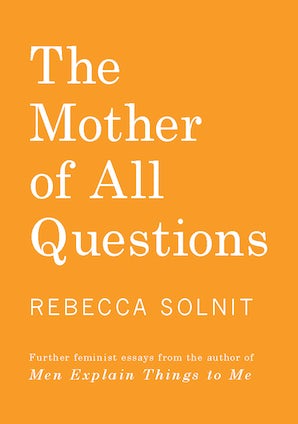 The Mother of All Questions

In a timely follow-up to her national bestseller Men Explain Things to Me, Rebecca Solnit offers indispensable commentary on women who refuse to be silenced, misogynistic violence, the fragile masculinity of the literary canon, the gender binary, the recent history of rape jokes, and much more.

Rebecca Solnit’s timely follow-up to her national bestseller Men Explain Things to Me offers a refreshing take on contemporary feminism.

Writer, historian, and activist Rebecca Solnit is the author of more than twenty books on feminism, western and indigenous history, popular power, social change and insurrection, wandering and walking, hope and disaster, including the books Men Explain Things to Me, Call Them By Their True Names, Hope in the Dark, and The Mother of All Questions all with Haymarket Books; a trilogy of atlases of American cities; The Faraway Nearby; A Paradise Built in Hell: The Extraordinary Communities that Arise in Disaster; A Field Guide to Getting Lost; Wanderlust: A History of Walking; and River of Shadows, Eadweard Muybridge and the Technological Wild West. She has received numerous awards and accolades, including a Guggenheim, the National Book Critics Circle Award in criticism, and the Lannan Literary Award for nonfiction. She was a finalist in 2017 for the PEN America Art of the Essay award for The Mother of All Questions that was also listed as one of The San Francisco Chronicle’s best books of the year. A product of the California public education system from kindergarten to graduate school, she is a columnist at Harper's and a regular contributor to The Guardian.