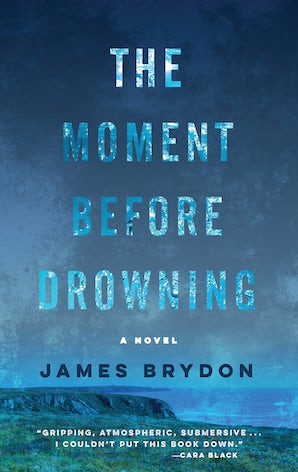 The Moment Before Drowning

"James Brydon's brilliant The Moment Before Drowning isn't an easy read. Not because of its style, which is sensuous and elegant, but because of its subject matter: the brutality behind war's front lines...After reading The Moment Before Drowning, dedicated readers might want to watch the award-winning docudrama The Battle of Algiers, which covers much of the same territory as Brydon's heart-wrenching novel."
--Mystery Scene Magazine

"An exploration of political oppression wrapped in a carefully constructed mystery. In Brydon's auspicious debut...the characters are alive and the mystery is mostly satisfying. An erudite and entertaining addition to the shelf."
--Kirkus Reviews

"Brydon's The Moment Before Drowning is one of the season's most remarkable debuts and the launch of a complex and truly memorable protagonist, Captain Jacques le Garrec, a lion of the French Resistance, now disgraced by his intelligence service in Algeria and returned to his hometown in Brittany, where he's promptly charged with investigating a cold case murder. Le Garrec has stepped directly out of a Jean-Pierre Melville film and into a seaside murder mystery, a noir and ambiguous figure setting out to right wrongs in a world ever more unknowable."
--CrimeReads, included in 10 Debut Crime Novels to Read This July

"The Moment Before Drowning is a highly lyrical novel. Brydon's prose is exquisite, and he certainly knows how to set a scene."
--New York Journal of Books

"A skillfully constructed and absolutely riveting thriller of a novel by a genuine master of character and narrative driven storytelling, James Brydon's The Moment Before Drowning is an especially recommended addition to community library collections."
--Midwest Book Review

"Brydon packs in so much emotion, suspense, tension, and heartbreak. This story literally took my breath away...This author is one to be reckoned with and I hope his next literary work will be published soon. Most highly recommended."
--Marjorie's World of Books (blog)

"The ending, whilst not the one that might have been expected, is one that has occurred many times in literature of all kinds but it doesn't seem in any way hackneyed. This is because the author has taken the trouble to detail the psychology involved in the murder and convinces us that what happened was a consequence of an aspect of human nature that never changes."
--Crime Review (UK)

As le Garrec awaits trial in the tiny Breton town where he grew up, he is asked to look into a disturbing and unsolved murder committed the previous winter. A local teenage girl was killed and her bizarrely mutilated body was left displayed on the heathland in a way that no one could understand.

Le Garrec's investigations draw him into the dark past of the town, still haunted by memories of the German occupation. As he tries to reconstruct the events of the murder, the violence of this crime and his recollections of Algeria intertwine, threatening to submerge him.

In 1959, a French Resistance hero investigates a murder in a small Breton town, while awaiting his own trial.

James Brydon grew up in North Shropshire, England, and studied English at Oxford. For over a decade, he has worked as a cryptic crossword setter. Under the name Picaroon, he sets two puzzles a month in the Guardian, and he compiles for the Spectator, the Times of London, and the fiendish Listener puzzle, drawing inspiration from sources as diverse as the films of Akira Kurosawa and the six-fold symmetry of snowflakes. He is fluent in French and Serbian, is currently polishing his German, and can hold a conversation in passable Chinese. He lives in St. Albans, England, with his wife and daughter. The Moment Before Drowning is his debut novel.