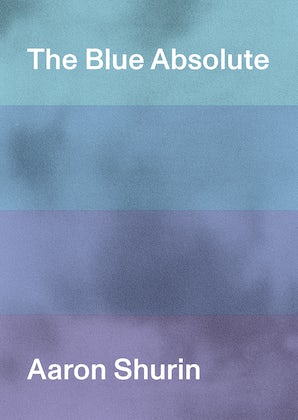 The Blue Absolute’s prose poems are hot boxes of lyrical language combusting with daily life. People move and think amidst a flurry of dots and dashes in a constant shift of perspective and action—urban and pastoral, highly figured and fragmented, grieving and dreaming—each poem a compressed but fluid zone of almost psychedelic intensity. The book closes with “Shiver,” an American epic, at once a lament for and vision of a great city on the edge: San Francisco
past, present, and future.

Urban and pastoral, highly figured and fragmented, grieving and dreaming, the prose poems of The Blue Absolute set people moving and thinking amidst a flurry of dashes, dots, perspective shifts, and the fragmented action of San Francisco, the great city on the edge.

Aaron Shurin is the author of fourteen books of poetry and prose, most recently Flowers & Sky: Two Talks (Entre Rios Books, 2017), The Skin of Meaning: Collected Literary Essays and Talks (University of Michigan Press, 2015), and two books from City Lights: Citizen(poems, 2012) and King of Shadows(essays, 20008). His work has appeared in over forty national and international anthologies, from The Norton Anthology of Postmodern American Poetryto Italy’s Nuova Poesia Americana: San Francisco,and hasbeen supported by grants from The National Endowment for the Arts, The California Arts Council, The San Francisco Arts Commission, and the Gerbode Foundation. A pioneer in both LGBTQ studies and innovative verse, Shurin was a member of the original Good Gay Poets collective in Boston, and later the first graduate of the storied Poetics Program at New College of California. He has written numerous critical essays about poetic theory and compositional practice, as well as personal narratives on sexual identity, gender fluidity, and the AIDS epidemic. A longtime educator, he’s the former director and currently Professor Emeritus for the MFA Writing Program at the University of San Francisco.