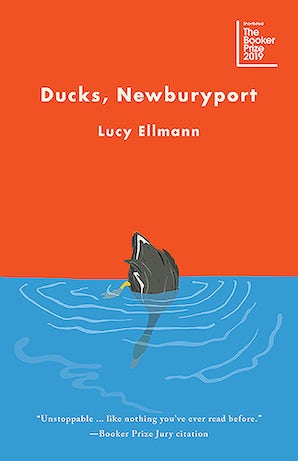 Baking a multitude of tartes tatins for local restaurants, an Ohio housewife contemplates her four kids, husband, cats and chickens. Also, America's ignoble past, and her own regrets. She is surrounded by dead lakes, fake facts, Open Carry maniacs, and oodles of online advice about survivalism, veil toss duties, and how to be more like Jane Fonda. But what do you do when you keep stepping on your son's toy tractors, your life depends on stolen land and broken treaties, and nobody helps you when you get a flat tire on the interstate, not even the Abominable Snowman? When are you allowed to start swearing?

With a torrent of consciousness and an intoxicating coziness, Ducks, Newburyport lays out a whole world for you to tramp around in, by turns frightening and funny. A heart-rending indictment of America's barbarity, and a lament for the way we are blundering into environmental disaster, this book is both heresy—and a revolution in the novel.

A form-breaking torrent of consciousness, narrated by an Ohio mother besieged by MAGA hats and mountain lions.

Lucy Ellmann’s first novel, Sweet Desserts, won the Guardian Fiction Prize. It was followed by Varying Degrees of Hopelessness, Man or Mango? A Lament, Dot in the Universe, Doctors & Nurses, Mimi. Her short stories have appeared in magazines, newspapers and anthologies, and she has written for the New York Times, Washington Post, Guardian, Independent, Independent on Sunday, Times Literary Supplement, Telegraph, New Statesman and Society, Spectator, Herald, Scottish Review of Books, Time Out (London), Art Monthly, Thirsty Books, Bookforum, Aeon, The Evergreen, and The Baffler. A screenplay, The Spy Who Caught a Cold, was filmed and broadcast on Channel 4 in the UK. She edits fiction for the Fiction Atelier (fictionatelier.wordpress.com), and abhors standard ways of teaching Creative Writing, which she considers mostly criminal. Though American by birth, she lives in Scotland.