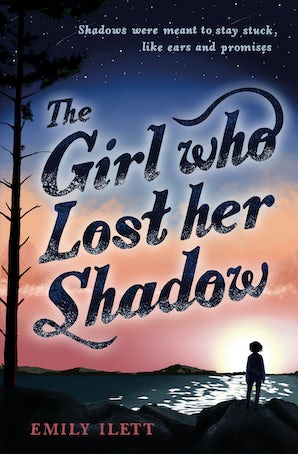 The Girl Who Lost Her Shadow

On the morning of Gail's birthday, she watches her shadow slip under the kitchen door. She's not surprised it decided to leave. Her dad has gone for good. Her big sister Kay, once Gail's best friend, has disappeared into sadness – and now her shadow has left too.

Determined to make things right, Gail chases after the shadows. But her adventures take her to unexpected places and Gail discovers that where there are shadows, there's darkness, and she's not the only one looking for something missing...

In a world of light and shadow, despair and hope sit side by side. Can Gail recover what the sisters have lost?

A lyrical, immersive, and luminous tale of sisterhood, The Girl Who Lost Her Shadow tells of bravery, the power of friendship, and being strong enough to ask for help when we really need it. Emily Ilett, winner of the 2017 Kelpies Prize, is an arresting, vital new voice in children's literature.

A lyrical, poignant story, beautifully and originally written, about the ripple effects of a loved one's depression and losing and regaining one's sense of self.

Emily Ilett studied at Glasgow School of Art and the University of Glasgow and now works at the Glasgow Women's Library. She was awarded the Mairi Hedderwick Writing for Children Bursary from Moniack Mhor in 2015, and was Children's Writer in Residence at Wigtown Book Festival the same year. The Girl Who Lost Her Shadow, her first novel, won the Kelpies Prize in 2017.