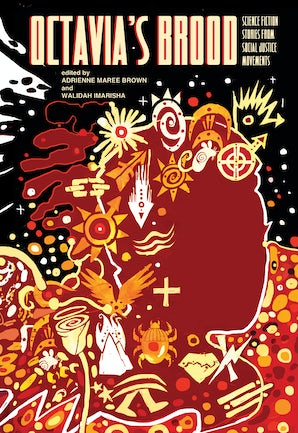 Whenever we envision a world without war, prisons, or capitalism, we are producing speculative fiction. Organizers and activists envision, and try to create, such worlds all the time. Walidah Imarisha and adrienne maree brown have brought 20 of them together in the first anthology of short stories to explore the connections between radical speculative fiction and movements for social change. These visionary tales span genressci-fi, fantasy, horror, magical realismbut all are united by an attempt to inject a healthy dose of imagination and innovation into our political practice and to try on new ways of understanding ourselves, the world around us, and all the selves and worlds that could be. Also features essays by Tananarive Due and Mumia Abu-Jamal, and a preface by Sheree Renée Thomas.

"Those concerned with justice and liberation must always persuade the mass of people that a better world is possible. Our job begins with speculative fictions that fire society's imagination and its desire for change. In adrienne maree brown and Walidah Imarisha's visionary conception, and by its activist-artists' often stunning acts of creative inception, Octavia's Brood makes for great thinking and damn good reading. The rest will be up to us." Jeff Chang, Who We Be: The Colorization of America

Conventional exclamatory phrases don’t come close to capturing the essence of what we have here in Octavia’s Brood. One part sacred text, one part social movement manual, one part diary of our future selves telling us, It’s going to be okay, keep working, keep loving.’ Our radical imaginations are under siege and this text is the rescue mission. It is the new cornerstone of every class I teach on inequality, justice, and social change....This is the text we’ve been waiting for.” Ruha Benjamin, professor of African American Studies at Princeton University and author of People’s Science: Bodies and Rights on the Stem Cell Frontier

"Octavia once told me that two things worried her about the future of humanity: The tendency to think hierarchically, and the tendency to place ourselves higher on the hierarchy than others. I think she would be humbled beyond words that the fine, thoughtful writers in this volume have honored her with their hearts and minds. And that in calling for us to consider that hierarchical structure, they are not walking in her shadow, nor standing on her shoulders, but marching at her side." Steven Barnes, Lion’s Blood

Never has one book so thoroughly realized the dream of its namesake. Octavia's Brood is the progeny of two lovers of Octavia Butler and their belief in her dream that science fiction is for everybody.... Butler could not wish for better evidence of her touch changing our literary and living landscapes. Play with these children, read these works, and find the children in you waiting to take root under the stars!” Moya Bailey and Ayana Jamieson, Octavia E. Butler Legacy

Like [Octavia] Butler's fiction, this collection is cartography, a map to freedom.” dream hampton, filmmaker and Visiting Artist at Stanford University’s Institute for Diversity in the Arts

Walidah Imarisha is a writer, organizer, educator, and spoken word artist. She is the author of the poetry collectionScars/Stars and facilitates writing workshops at schools, community centers, youth detention facilities, and women's prisons.

Building new worlds from the margins of the old.

Walidah Imarisha: Walidah Imarisha is a writer, organizer, educator and spoken word artist. She is the author of the collection of poetry Scars/Stars. Imarisha has also facilitated writing workshops, for students in grades three through twelve, in community centers, youth detention facilities, and women’s prisons.

Adrienne Maree Brown is a 2013 Kresge Literary Arts Fellow writing science fiction in Detroit. She has also received a 2013 Detroit Knight Arts Challenge Award to run a series of Octavia Butler based science fiction writing workshops. Adrienne has helped launch a loose network of Octavia Butler and Emergent Strategy Reading Groups for people interested in reading Octavia’s work from a political and strategic framework, and is building with Octavia E. Butler Legacy Network on other ways of extending Butler’s work.

adrienne maree brown is the author of Emergent Strategy: Shaping Change, Changing Worlds and co-editor of Octavia's Brood: Science Fiction from Social Justice Movements. She is a social justice facilitator focused on black liberation, a doula/healer, and a pleasure activist. adrienne lives in Detroit

Sheree Renée Thomas is an award-winning fiction writer, poet, and editor. Her work is inspired by myth and folklore, natural science and conjure, her roots in Memphis, and in the genius culture created in the Mississippi Delta. Sheree’s stories and poetry explore ordinary people facing extraordinary circumstances.
She is the author of Sleeping Under the Tree of Life (Aqueduct Press), honored with a Publishers Weekly Starred Review and longlisted for the 2016 James Tiptree, Jr. Award, and of Shotgun Lullabies (2011), described as “a revelatory work like Jean Toomer’s Cane.” Thomas edited the two Dark Matter (Hachette) black speculative fiction volumes that first introduced W. E. B. Du Bois’s work as science fiction, winning two World Fantasy Awards (2001, 2005).
Her work appears in numerous anthologies and literary journals, including The Big Book of Modern Fantasy, Sycorax’s Daughters, Do Not Go Quietly, So Long Been Dreaming: Postcolonial Science Fiction & Fantasy, Memphis Noir, Revise the Psalm: Work Celebrating the Writing of Gwendolyn Brooks, Afrofuturo(s), Ghost Fishing: Eco-Justice Poetry Anthology, The Ringing Ear, Apex Magazine, FIYAH Magazine, Callaloo, Fireside Quarterly, African Voices, Jalada, Strange Horizons, Blacktasticon, Mojo Rising: Contemporary Writers, Mojo: Conjure Stories, Stories for Chip: Tribute to Samuel R. Delany, 80! Memories and Reflections On Ursula K. Le Guin, and Harvard’s Transition.
She is the Associate Editor of Obsidian: Literature & Arts in the African Diaspora (Illinois State University, Normal), the Founding Editor of MOJO: Journal of the Black Speculative Arts Movement, and the co-editor of Trouble the Waters: Tales of the Deep Blue (Rosarium). Honored with fellowships from Bread Loaf Environmental, the Millay Colony of Arts, Smith College as The Lucille Geier-Lakes Writer in Residence, the New York Foundation of the Arts, VCCA, Cave Canem Foundation, and the Tennessee Arts Commission among others, Thomas’s multigenre writing explores the hidden wonders in the invisible. Her stories have received Notable Mention in the Year’s Best American Science Fiction & Fantasy and Honorable Mention in several volumes of the Year’s Best Fantasy & Horror. Her editorial work uncovered a legacy of over a century of black science fiction writing and helped launch the careers of some of the most exciting new voices in the field.
Nine Bar Blues from Third Man Books is Sheree’s debut, all fiction collection. The stories encompass the heart, spirit, and music of the Mississippi Delta and of Memphis, Tennessee, where she was born and currently lives. Visit her on Facebook/Instagram @shereereneethomas Twitter @blackpotmojo