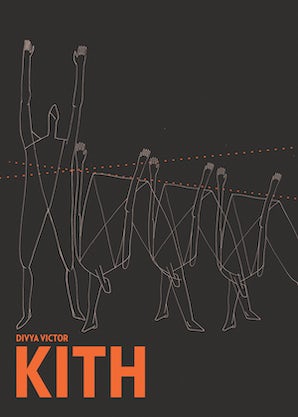 Kith describes postcolonialist relation from the painful psychohistorical perspective of a hybrid, in multiple exiles. Victor reaps the pain, reams the pain, approaches the painful material from striated vantages, using discrete methodologies of extraction. This is not a pretty poetry of nostalgia for bittersweet pungencies, no invitation to savor bemusing exoticisms; this poetry invites disassociation from that which is no longer to be borne.

in one such case a woman embroidering the name of her fourth child into the mantelpiece tapestry was called by her husband to suckle oil from the Persian gulf in a city that clotted around a oasis where centuries ago star crossed lovers failed each other Layla and Majnun: she dying in waiting, he walking miles and kissing every wall to know if she lived behind it and from which she would return without her hair and with a spool of thread to spell again

Divya Victor is the author of Natural Subjects, UNSUB, and Things to Do with Your Mouth. Her criticism has appeared in Journal of Commonwealth and Postcolonial Studies, Jacket2, and the Poetry Foundation’s Harriet. She lives in Singapore, and is assistant professor of poetry and writing at Nanyang Technological University.

Divya Victor is the author of several books and chapbooks, including Natural Subjects (winner of the Bob Kaufman Award), UNSUB, and Things To Do With Your Mouth. Her chapbooks include Semblance, Hellocasts by Charles Reznikoff by Divya Victor by Vanessa Place, and SUTURES. She is from India, Singapore, and the United States, where she is Assistant Professor at Michigan State University.