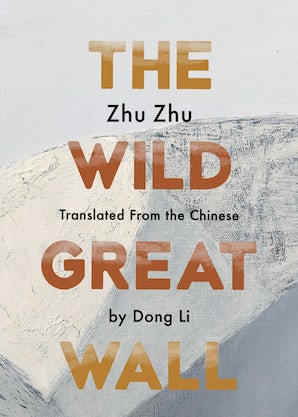 Though revered in literary circles, Chinese poet Zhu Zhu remains on the periphery, writing quietly. His work, lucidly rendered by accomplished translator Dong Li, weaves slowly through personal and larger histories to reveal an astute, painterly vision of the world. Selected from an oeuvre spanning 1990 to the present, the poems of The Wild Great Wall animate seeming minutiae and collective memory to interrogate the nature of time and the encounters that occupy it. Tight as a wound rope, they bind to the interiority of the mind and wait to be unraveled.

The edgy, lyrical verse of an essential voice from the China

Zhu Zhu was born in Yangzhou, P.R. China. He is the author of numerous books of poetry, essays, and art criticism, including a bilingual French edition translated by Chantal Chen–Andro. He’s the recipient of Henry Luce Foundation Chinese Poetry Fellowship at the Vermont Studio Center and the Chinese Contemporary Art Award for Critics. He was also a guest at the Rotterdam and Val–de–Marne International Poetry Festivals. He lives in Beijing.

Dong Li was born and raised in P.R. China. He is an English–language poet and translates from the Chinese, English, and German. He’s the recipient of a PEN/Heim Translation Grant and fellowships from Alexander von Humboldt Foundation, Akademie Schloss Solitude, Ledig House Translation Lab, Henry Luce Foundation/Vermont Studio Center, Yaddo, and elsewhere.Dong Li was born and raised in P.R. China. His honors include fellowships from Akademie Schloss Solitude 2015-2017, German Chancellery–Alexander von Humboldt Foundation 2015-2016, PEN/Heim Translation Fund, The Corporation of Yaddo and elsewhere. He has poems in Kenyon Review, Conjunctions, manuscript (Austria, in German translation), and others, as well as translations in World Literature Today, PEN America, Guernica and others. His book-length translation of the Chinese poet Zhu Zhu, The Wild Great Wall, will be published by Phoneme Media in 2018. His trilingual anthology of contemporary American, Chinese and German poetry in response to a poem by the late C.D. Wright will be forthcoming from the German publisher Matthes&Seitz Berlin in the fall of 2017.